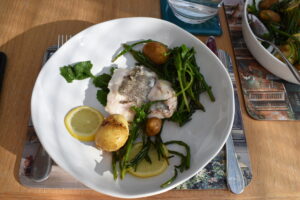 Photo: gently pan-fried hake served with new potatoes, samphire and lemon (hake is one of my favourite fish as a Spaniard, and the  delicious side dish is from A Table for Friends by Skye McAlpine.

Fishing and fish consumption in Chile

As part of the #encuentrodelosmares event 2020 organised by Madrid Fusión 13-15th July, I learnt about Tres Peces, a pioneering fish restaurant from Valparaíso, Chile, that took the lead in promoting responsible fishing and fish eating. In doing so, they gained 55.000 clients in their first year (2018-19). How did they do it?

The restaurant partnership, two cooks and a journalist specialised in fish and aquaculture, met in a social innovation chat in Santiago. In their passionate talk, they discussed Tres Peces and their initiatives.

The surprising data is that Chile, a country with 4.300 km of coastline and 92.000 fishermen, are leaders in fish exports but do not actually eat much fish themselves. This might be less surprising if you knew that fish consumption has also been decreasing in Spain, one of the biggest fish-eating countries in the world together with Japan. Still, six in 10 Spaniards eat fish two or three times a week, which is more than most British people and, probably more than Chileans.

Fishing and fish consumption in the UK

But fish consumption is slowly increasing in the UK, personal wellbeing being the primary driver. What prevents the British from eating fish are prices and concerns about sustainability and over-fishing. Other reasons are: lack of recipe knowledge, lack of availability of fresh fish in local shops, lack of time to prepare it from scratch, not liking the smell, and difficulties planning meals ahead (The Fish Site, 2012, but the increase seems to continue). More stats on British fish consumption on UKfisheries.net.

If restaurants in the UK joined up forces with local councils and schools to promote knowledge about fish, fishing and cooking with fish instead of exporting it, wouldn’t it be great? The top export markets for British fish by value are France, Spain, the USA and the Irish Republic. What if the British learnt to value it themselves? Now, I know that those with a bigger purse can find some good quality fish in supermarkets like Waitrose or Abel and Cole. Regrettably, competitors like Riverford mainly sell meat. If people were more knowledgeable about fish and had a closer connection to it, they’d probably buy more. So, let’s get onto what Tres Peces do so well.

My advice as a consumer

Read about my translation services