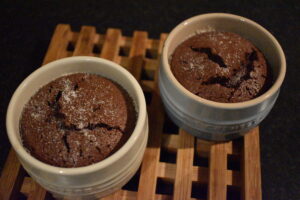 One of the problems is that Spanish is less agglutinative than English, which means you can say a lot more with less words in English than in Spanish, but... I managed a title only a couple of words longer,  “Volcanes de chocolate con cumbre salada y centro de avellana” [chocolate volcanoes with a salty summit and hazelnut centre].

Did you spot the mistake? Carried away with the image of a snowy covered volcano, like Volcán Ojos del Salado in Chile, I made what could be considered a mistake if you're finickity, because, literally, it's fine sugar, not salt, what's on top. For the record, there's a lot more dusting sugar in Béatrice Peltre's photography than on mine!

This would be an extremely easy mistake to make using computer-assisted translation tools, where the translator moves numbly down the boxes or segments of text. CAT tools get in the way of seeing the whole picture. Therefore, we should treat recipe titles as we would article or book titles. A revised translation could be: “volcanes de chocolate con cumbre nevada y centro de avellana” [snow-capped chocolate volcanoes with a hazelnut centre]. Because molten cakes, translated literally, does not really work.

You might not know that the invention of this chocolatey cake is disputed between the French and the Americans. Béatrice Peltre, the author, is French and, even though her audience is American, she did not use the American term lava cake, which rather puts my translation into question. I admit to having fallen for the imagery of the volcano with its flowing crater, hence my free translation. But… What if the author preferred a French term? What's more, she likes serving the cake in the ramekin where it is baked; in which case you could argue it does not look like a volcano. But it still has a crater, I'd say! Maybe I would translate it differently today, who knows.

But, say we wanted to avoid the volcano, we would be faced with fondant and coulant. According to Derechupete, each Spanish restaurant uses a different name for this cake, because the term ‘coulant au chocolat’ was patented by Michel Bras, his French inventor; which means you're not supposed to use it for any variations of the cake. What's more, coulant and fondant are often used as synonyms, but, technically, they are two different cakes (see the articles referenced at the end).

According to Diccionario de Gastronomía, in the original coulant a ball of ganache provides the melting centre. In Peltre’s recipe, a square of hazelnut-flavoured chocolate (gianduja), not to be confused with chocolate with hazelnuts. What if we are not allowed to use either coulant or lava cake, then? Molten cake works in English, but a literal translation (pastel fluido) doesn’t really. It doesn't sing to me.

I mentioned gianduja. As a French person, Peltre loves Valrhona chocolate and Valrhona Gianduja is the variety with hazelnuts she recommends for the cake's centre. Alas, this would be hard to find in Spain (and the UK) unless you use a specialist online shop. Gianduja is made from a paste of chocolate and hazelnuts, not with brittle (typical chocolates sold in the UK), not with whole hazelnuts (popular in Spain). I was overjoyed when I found Valrhona at Heathrow airport the Christmas after my translation. Later, I found Gianduja in the gourmet shop of Steff’s Kitchen in Beaulieu (New Forest, UK).

But, returning to my translation, either you use gianduja or you find a substitute.

A whole imagery goes on in this recipe: from the molten and dusted cake to the magic sensation of digging into your individual portion and discovering the puddle of chocolate, to the magic of melting happening in the oven. I will not reproduce it, because of copyright. 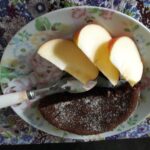 How easy is it to find ramekins in Spain? I live in the UK, so my port of call was the online page of El Corte Inglés, a high-end department store, because there is a branch of El Corte in most cities in Spain. Even there, the only ramekin sold is ‘ramekin universal’. The measures, however, are in centimetres: 9 or 11,5.

Converting volume to centimetres is a tricky one. I used the measures from El Corte Inglés and, in the instructions, advised to be experimental, which is what Peltre suggests in her second book’s introduction. At the end of the day, you wouldn’t normally serve guests a dish you’re making for the first time.

Tin size does matter though. When I made the fondants at home, I used two Le Creuset ramekins and one bigger individual pie dish. The Le Creuset cakes turned out perfect;  the other was more like a brownie or a chocolate cake, though still delicious.

Pure vanilla extract is difficult to source, and expensive. Vanilla sugar is more common in Spain and France. Either you leave the original and list a shop to obtain it or you have to think that vanilla sugar and essence won’t exactly work in the same way or have the same strength.

Fleur de sel is one of those ingredients that each brand and translator has translated a different way, but one needs to choose a translation based on some reliable criteria. ‘Flor de sal’ sounds very literal but pretty, but ‘sal en/de escamas’ is more often the term you find in supermarkets even if it makes you think of fish skin scales. Gross!

More often than not, Spanish would be wordier and translators would need to be familiar with specialist vocabulary. For example:
- Tap the excess out. Which would be longer in Spanish.
- Beat until the batter is light and pale in colour. For which there is a single-word term both in English and Spanish....
- Fold in the flour. Which is much longer in Spanish.

In summary, translating a cookbook can be rewarding as it requires a variety of skills and a lot of creativity, but neither cookbook nor recipe translation are to be taken lightly and, I hope you agree with me by now, the task should be left to specialist translators.

Learn about my services