Want to enjoy an easy, quick-to-make and comforting pudding that won't use up your precious eggs at the moment? Make panna cotta. Panna cotta (meaning cooked cream) is a creamy pudding made with a mixture of cream and milk, traditionally fragranced with vanilla and often served a fruit topping. I made mine to use up whole milk forgotten in the fridge. For that reason, I left out the cream; so, literally speaking, I made latte cotto. A colleague suggested some wonderful ideas for toppings (candied orange peel, chestnut purée), which I look forward to trying soon.

Maybe I missed it, but I could not find panna cotta in the Larousse Gastronomique. According to Wikipedia, it originated in the northern Italian region of Piedmont in the 1900s and has some cousins: Bavarian cream and Blancmange.

What I loved about homemade panna cotta is that it has the texture of a Spanish crème caramel (see G & Cía, 2011 or Parsons, 2012), not the gelatine consistency of industrial versions, and crème caramel is my supreme comfort food.

In the raspberry sauce, Peltre, who writes for the American public, uses corn starch. However, in the UK, corn starch is widely known and sold as corn flour.  If I hadn't been cooking since I was a child and if I did not usually order my flours from Healthysupplies.co.uk, I probably would not know the differences between corn starch and corn flour. To make matters more complicated, there's a third term the Americans love: corn meal. I know that corn starch is used to thicken the sauce, but if someone translated it as harina de maíz  (corn flour), that could lead to a misunderstanding, because harina de maíz and fécula de maíz (corn starch) are not the same. In Spain, a well-known brand of corn starch is Maicena, but are all of these gluten free? And what exactly are they?

I checked various sources to write my article. Had I not had previous experience in the kitchen and reading about flours, what I found would have been rather confusing.

If you weren't confused enough, Healthline adds that, in the US, the term corn flour tends to be confused with corn meal (a coarse version of corn flour with a more distinctive flavour). Over here in the UK and Ireland corn starch is known as corn flour and perhaps, the article says, corn flour as corn meal (personally, I've only seen the term corn meal, almond meal and the kind, in American cookbooks). I checked various British supermarkets and, indeed, corn flour was the only term in use.

Healthline did have some useful advice:

In conclusion, one needs to be extremely careful choosing one's research resources.

Wordreference.com can be useful to get started but, when you look up corn flour, it suggests both harina de maíz (corn flour) and Maicena (corn starch) as translations. When you look up corn starch, the same suggestions are given. Make your own conclusion. A decent recipe or cookbook translator will know their stuff and be extremely good researchers. They will know how ingredients work and understand the purpose they are being used for. They will know that slipping a gluten ingredient in a gluten free cookbook would be serious.

Celiac sites, particularly official institutions, should contain useful information regarding gluten free ingredients. But I've found they can also be contradictory: you know, health information is often conflicting. So, Beyondceliac.org says that corn flour, corn meal and corn starch are all gluten free. You should however read labels and buy those explicitly labelled as gluten free because of potential cross-contamination.

Meanwhile, Singluten.es says that corn contains a specific type of gluten that does not generally affect people with a gluten intolerance or allergy. They say corn products are generally safe but a small proportion of celiacs might find them adverse and it might hinder their progress. The article is written by a qualified nutritionist and dietitian specialised in celiac disease and their sources are scientific.

Faced with the conundrum above, one possibility would be to suggest a gluten free substitute product. I recently bought a bag of arrowroot, a gluten free alternative to corn starch. Both can be used as thickeners but, you guessed it, with differences. Sawakinome says that corn starch jellifies at a higher temperature; if the recipe calls for a long cooking time, corn starch is recommended since arrowroot does not cope well with prolonged high temperatures. Panna cotta's infusing time is very short and, if I were to suggest a substitution, arrowroot would be one of them. 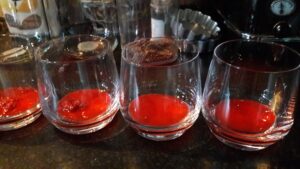 Can you use sauce for both sweet and savoury foods? It appears you can; though, to me, it sounds odd referring to sweet matters. In the gastronomy section of A República, I found references to salsa pesto, salsa romesco, salsa bechamel, salsa para steak, but also salsa de chocolate. However, I sense what I need is coulis. Petitchef.es defines coulis as a type of sauce that can be sweet or savoury; obtained blending certain foods that have been cooked with the purpose of concentrating their flavour; and strained to obtain a fine texture cream with a highly concentrated flavour - pretty much what I have done with this sauce. So, coulis it is.

The making was easy-peasy, the measuring a bit iffy. For starters, do all gelatine sheets weigh the same? I used Dr Oekter sheets. The pack states the total weight, 13g, not the grams per sheet. That comes to 1.625g per sheet, perhaps why Canal Cándido TV rounds it up to 2g per sheet (but that is a very rough rounding!). To weigh gelatine sheets you'd need a high precision scale, which I don't have. You need four sheets to set a pint (570 ml), but my recipe requires only 475 ml. Furthermore, we're not making gelatine but panna cotta, which requires a different consistency.

I decided to use the amount suggested in my recipe (2.5 sheets) and see what happens and it was just perfect. However, if  you had never made panna cotta, you'd be wondering as I was if you needed to change anything. The author does provide conversions for gelatin powder in the introduction but I chose to use sheets, which, by the way, are also known as fish tail in Spanish?!

I had eaten panna cotta many times, the commercial type, a consistency I disliked. Making the dish at home helped me understand what the texture of panna cotta should be. Another example, commercial tiramisu bears no resemblance to the velvety heaven I enjoyed in Verona. 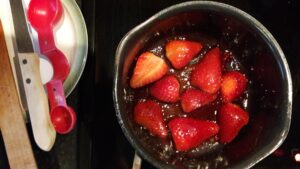 I did two batches, one raspberries, one strawberries. So far so good but, did I need to cook all the fruit or save some? Read on.

The instructions for the raspberry sauce call for 12 of the 14oz raspberries. The author provides conversions in the list of ingredients but forgot the in-text conversions. I did this one by eye as I did not have as much fruit as required anyway and it wasn't a vital thing.

I wasn’t 100% sure if I should reserve some raspberries uncooked. The raspberries in the picture are covered in sauce to make them look glossy and enticing, making it harder to tell if they are cooked or not. I did save some, but ate them!

As a translator like as a cook, you should always read the whole recipe before translating. It ends with “top with the raspberry sauce and the rest of the raspberries and serve”. If they didn’t go in the sauce, they probably are raw!

However, an option would be to list raspberries twice in the ingredients, 12 oz for the sauce, 2 oz for decoration. Yet... I have a feeling that Spanish readers would complain about the measure being divided. When I see ingredients listed twice or even thrice in the instructions, I need to be counting how many I need to buy, making sure I haven't missed any.

The Spanish and the French like to improvise and prep as they go; the British like to prep before cooking and thus like ingredient lists with steps (chopped, sliced, cooked, separated). I've been using foreign recipes so long that I like prepping too. However, I admit that I also should spend more time reading the recipe. Everyone has to take responsibility.

Beyond Celiac (n.d.). Is Corn Gluten-Free?https://www.beyondceliac.org/gluten-free-diet/is-it-gluten-free/corn/