How to specialise in cookbook translation 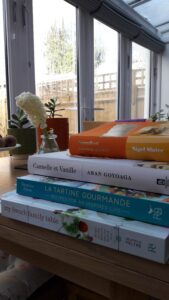 Last Friday, I heard someone trivialising recipe translation on Twitter: what they had to translate was obviously a few easy recipes. As an expert in the making, I will tell you how I got to be a semi-expert in food translation. The trip is not over; I have just embarked on a gastronomy translation course.

Food translation is fully immersed in culture. Reading about it won't be hard work, because it is fascinating. To give you an idea, I read about:

TIP 2. Look at the twenty best sold cookbooks in Amazon in your target country:

You will see how translated cookbooks fare in your country and that may give you a hint as to how acquainted your target audience will be with them and what their expectations might be.

I inspected some of Jamie Oliver's and Ella Woodward's to see how people found them. I saw the problems they encountered, what they found irritating. It might be about the book rather than about its translation, but it is useful to see how readers feel.

TIP 4. Look at the reviews of your favourite author's cookbooks:

In my case, most of the reviews of Béatrice Peltre's books (@tartinegourmand) were incredibly positive, but a minority had their complaints. Little spoiler here: first, not everyone likes the hybrid cookbook with its blog-style stories and, second, some people really want to be spoonfed. However, I came to understand these same people making a recipe the other day. Now I feel a little less snooty and better able to sympathise with the differences in culinary prowess in different countries. Will discuss in #ThatTranslatorCanCook.

And see how they are different from hybrid cookbooks. I inspected Poderosos superfoods and Cocina sin gluten, both by Nuria Penalva (@EdicionesLibsa), both really useful to research vocabulary and to get inspiration for more creative writing. Penalva is quite a good writer.

What's different about their style? Are they addressed to a different type of reader? Hybrid cookbooks are a mixture of literature, blog, travel book (it varies) and recipe repository. I discovered late in my research that the genre had already been imported to Spain. I found and read, Postres Saludables by Auxy Ordóñez (@LibrosCúpula) and Repostería sana para ser feliz by Alma Obregón (@edit_planeta), both with imported elements of the foreign hybrid cookbook, yet with different styles and degrees of foreignization.

And see how other translators did it. Do you like their decisions? Can you see why they made them or do you disagree with them? Do you think they could have done better? Why? I inspected La cocina vegana by Adele McConnell (@grupozeta) and Las delicias de Ella by Ella Woodward (@Salamandra_Ed).

I was very lucky that the translator of Las delicias de Ella made time to answer some of my questions about his decisions. Whether I made the same or not, they helped me understand and justify mine in some cases.

These talk about the latest food trends and include modern recipes made using the latest ingredients. I closely examined @Cuerpomente, a magazine I buy whenever I go home.

TIP 10. Watch MasterChef in your languages:

I watched various episodes of Spanish MasterChef Junior 5 to see what terminology the public would be familiar with. Do they use lots of word loans? Do they use tons of jargon? Do you think the general public will be familiar with them? Does everyone watch these programmes? How about foreign cookery shows on private channels such as Canal Cocina? Are these available to everyone for them to be familiar with Jamie Oliver and other foreign cook styles?

For example, I found a great baking glossary by CNT-AIT. But, will everyone know this terminology or should you use it with care?

TIP 12. Make your own glossaries:

I had to research countless gluten free terms, which are rather unstable, that is, different brands and different translators use different terms for the same thing. I also researched the availability of gluten free ingredients in Spanish supermarkets by checking every single ingredient I needed on well-known supermarkets and also alternative shops. But you will find yourself needing substitutions for the simplest ingredients. For example, different varieties of apples and pears are grown and sold in different countries.

So, whoever thought that translating recipes or cookbooks was light work, watch out for the next instalment of #cookbooktranslation describing what it means to translate a hybrid (i.e. mixed genre) cookbook! 🙂